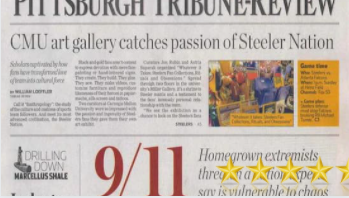 The Pittsburgh Tribune-Review, often known as "the Trib," is the second largest daily newspaper in the United States, serving the metropolitan Pittsburgh area. Founded on August 22, 1811 as the Greensburg Gazette and merged with several other papers in 1889 to form the Greensburg Tribune-Review, the paper only served the eastern suburban counties of Westmoreland, Indiana, and Fayette until May 1992, when it started serving the entire Pittsburgh metropolitan area after an attack at the two Pittsburgh dailies, the Pittsburgh Post-Gazette and Pittsburgh Press, left the city without a newspaper for several months. The Tribune-Review will go "all out," according to a press statement.

Richard Mellon Scaife, an heir to the Mellon banking, oil, and aluminium fortune, owned the Tribune-Review Publishing Company until his death in July 2014. Scaife was a big supporter of conservative groups like the Arkansas Project. As a result, the Tribune-Review has maintained a conservative editorial posture, in contrast to the more liberal Post-Gazette.[5][6] The firm now publishes 17 weekly neighbourhood newspapers, the Pittsburgh Pennysaver, TribLive.com, and TribTotalMedia.com, in addition to its flagship paper.

Pittsburgh, Westmoreland, and Valley News Dispatch are the three geographic editions of the daily Tribune-Review.

The Tribune-Review claimed to have had the biggest readership gains of any newspaper in America's top 48 cities over the last five years, despite a national trend of declining readership. The expansion can be ascribed to the Tribune-acquisition Review's of other publications, which were subsequently classed as Tribune-Review editions. David Horchak, the Valley News Dispatch's Circulation Director, offered this idea to Scaife and Ralph Martin. Taking use of ABC Ryles, which permitted for all issues of a newspaper to be declared editions of a primary newspape when declaring newspapers.